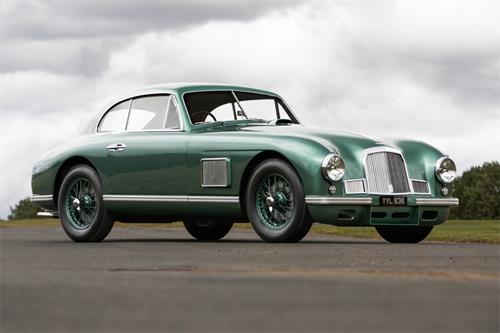 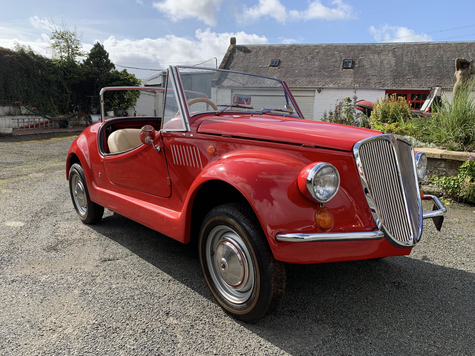 Classic Car Auctions have among their lots at the forthcoming auction on the 5th October a selection of what could be described as fun and funky yet frugal classics.
One of the stand out cars is from the 1970s, a 1972 Fiat 500 Gamine by Vignale. Scoring extremely highly on the condition report, this small two-seater is based on the Fiat 500 was produced by Carozzeria Vignale. Now fully restored by a London specialist and presented in bright red with beige interior, with the mileage is indicated at 27,637 miles. Estimated at £22,000 to £26,000 this is a much sought after and trendy UK right-hand drive car.
In 1988 Wolfgang Hoffman took the Citroen 2CV and developed a series of kits which are still available today. The designs varied from a pickup to a limousine. What we have here being offered in the sale is a 1984 Citroen 2CV Hoffman Cabrio which could be one of two left in the UK and possibly only 1,700 in the world. The kit came in the form of a glass-reinforced plastic body with steel fame side windows and a convertible soft-top and boot lid. The vendor of this car has used it has her daily driver over the last three years and has just had it serviced ready for the next owner. Estimated at £8,000 to £10,000 this is an unusual take on the classic 2CV.
The Roaring Twenties was the era of large scale adoption of cars and the General Motors group introduced the Pontiac brand in 1926 offering a cheaper range of six-cylinder cars. This 1928 6-28 2-door Sedan has the 25hp, 3050cc straight-six with an L Head and was to become the most popular in the range. Finished in Forest Green with a fabric roof and 12 spoke wooden wheels this is a fascinating car at an estimated £8,000 to £10,000.
Now moving on to the 1930s we have what is believed to be called a Speedy, a 1934 Austin 7 Special which had been exported to New Zealand and has undergone complete restoration prior to arriving back in the UK. The interior has been re-trimmed and the body has been re-painted red. Estimated at £10,000 to £12,000 this little open-top tourer will be UK registered in time for the sale.
Our second Austin is the 1936 10 Tourer which was restored 15 to 20 years ago and features a fully functioning Dickie seat and a good soft-top. Estimated at £7,000 to £9,000 this is a great pre-war open-top tourer and an inexpensive way into classic car ownership.
The third of our Austins takes us to the 1970s and this 1974 Austin Mini Clubman is a real find with just 12,000 indicated miles. With just two registered owners and in almost completely original condition having been stored for most of its life, this little gem is being offered at an estimated £7,500 to £9,500. The interior remains as new and the bodywork and mechanicals have been refreshed and now ready for its next owner.
Gary Dunne, Classic Car Auctions auction manager commented: “These are some of the great cars being offered in a weeks time at the Warwickshire Event Centre. The Fiat 500 Gamine really stands out not just in condition but also looks fabulous in red and the 12,000-mile Clubman is also a supercar for one lucky bidder”.
“We have over 115 lots of high quality and rare cars, from current classics to future classics, plenty on offer to suit all budgets.”
If you are thinking of consigning your car in the future, you can pre-book an appointment to come along to our Cars Coffee and Consigning event that we are holding at the British Motor Museum on the following Wednesdays, 9th and 23rd October and 6th November where one of our consigners will be on hand to help you through the process and we can arrange professional photography and entry to the museum at our cost entirely free of charge.
Viewing takes place on Friday 4th October from 12pm to 6pm with the auction getting underway on Saturday the 5th from 12pm.
Classic Car Auctions can be contacted on 01926 640888 or email enquiries@classiccarauctions.co.uk and would be happy to talk with you about any of the cars consigned, alternatively, have a chat with them on the day.
2019 Forthcoming Auctions
5th October - CCA October Classic Car Sale, Warwickshire Event Centre
7th December - CCA December Classic Car Sale, Warwickshire Event Centre

Posted by jeffharris at 21:36 No comments:

JAGUAR, MERCEDES AND FORD MAKE IT 1, 2, 3 AT BARONS, SANDOWN PARK

JAGUAR, MERCEDES AND FORD MAKE IT 1, 2, 3 AT BARONS, SANDOWN PARK 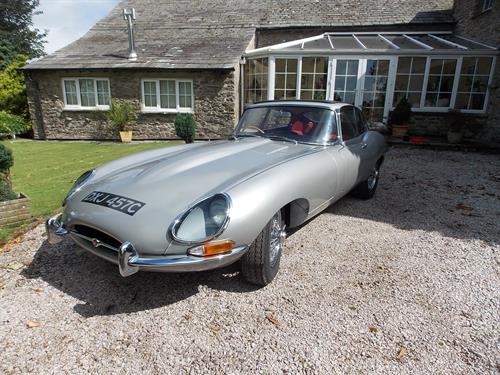 A beautiful 1965 Series 1 Jaguar E-type FHC was first past the finishing post at Barons’ Jaguar Heritage, Classic & Sports Car sale at Sandown Park racecourse last Friday, September 20th. The E-type, which has been the subject of a £60,000 restoration, sold for £71,500 and was followed by a stunning 1968 Mercedes-Benz W113 290SL Pagoda, an original UK RHD car, which achieved £66,000.
The third-highest price of the day was the £25,850 achieved for the sprightly 1936 Ford Model 68 with safari roof, which thoroughly exceeded its £17,000 top estimate. This motor car has a fine history in endurance rallying, having won the Spirit of the Rally trophy in the 2003 Safari Challenge, and subsequently completed the Circuit of Ireland, Africa’s Chipembele Rally and the Peking to Paris Rally.
63 out of the 100 lots sold, with keen bidding seeing notable cars such as the very rare 1972 Citroen DS21 ‘Jubilee’ EFI Pallas exceeding its guide price to sell for £19,470. An original and rare factory manual supercharged 1995 straight six Jaguar XJR, one of just 105 built-in RHD, nearly doubled its estimate, selling for £4,840, while a fine future classic - a 2007 Jaguar S type XS Sport - performed equally well, selling for £4,510.
All 14 of the classic and future classic motorcycles, trikes, monkey bikes and quad bikes in the sale were snapped up by enthusiasts, with the 1969 Honda Z50A monkey bikes - perfect for the historic racing paddock and one signed by John Surtees and the other by Sir Stirling Moss - selling well, and the two Yamaha Banshees each exceeding top estimate.
Barons’ next sale at Sandown Park is the Autumn Classic on October 26. Early entries include a handsome 1958 Austin-Healey 100/6 2+2, a 1966 Ford Mustang 289 Auto and a 1958 MG A Roadster 1500. For further information please visit www.barons-auctions.com.
RESULTS, BARONS AT SANDOWN PARK, SEPTEMBER 20TH 2019

Posted by jeffharris at 19:41 No comments:

Silverstone Auctions marque dedicated sale for Ferrari and Porsche was well supported on Saturday as owners clubs took part in the day’s events that saw a Porsche Carrera GT and a rare Ferrari 599 Manual top the sale.
The auction took place at the Dallas Burston Polo Club in Warwickshire with 66 cars on sale across both marques and the Porsche Club GB held their Pride of Ownership within the grounds, with the presentation taking place in the break between the two sales.
The sale of Ferraris were the first out of the blocks with some very notable cars attracting lots of interest. With four Ferrari 599s in the auction, the rare manual version sold for £360,000 and swiftly followed one of 40 special editions an Alonso Final Edition achieving £208,125. Jay Kay’s 356 GTC/4 Coupe found a new home at £219,375. Lot 326 the 1995 Ferrari 512 M had a fierce battle which eventually settled on bids going up by the £1,000 much to the support of the room and the auctioneer achieving a superb £153,000.
The star lot in the sale of Porsches was the 2005 Carrera GT which sold on the phone for £607,500, a stunningly rare car looking superb as it took pride of place in front of the rostrum. Jay Kay’s second car in the auction was his 911 (911) Turbo S which went for £106,875. Lot 406, the rare manual 928 GT sold for £51,750 to new owners, one of whom was so happy with their purchase he couldn’t stop grinning from ear to ear and was over the moon when he finally got to sit in it after the auction had finished. Another car that was subject to much discussion on the day was Lot 430 the 944 Turbo Cabriolet which sold for £27,000, a rare car, one of just 200 finding a new home. Lot 425 the rare and desirable early 1971 911 2.2 S sold for £72,000.
Nick Whale, Silverstone Auctions Managing Director commented: “We had some fabulous cars on offer with the key cars selling and finding new homes. The Porsche sale achieved a sale of £1.2 million which was good for the marque despite them having a tougher year of late. The Ferraris did well with £1.8 million in sales with Jay Kay’s car selling along with two of the 599s.”
“It was great to have the support of the clubs and their enthusiastic members. Working with them as we regularly do, is always a pleasure.”
“Our next sale is at the NEC for the Lancaster Insurance Classic Car Sale, which is held over two days. Traditionally a great weekend for us and our final sale of 2019.”

Posted by jeffharris at 19:22 No comments: