1914 Rolls-Royce 40/50 Silver Ghost Skiff, estimate 7,200,000-9,200,000 DKK
It’s a rare treat to own a Rolls-Royce, and quite a feat to own more than one. Henrik Frederiksen is the proud owner of an incredible thirteen Rolls-Royce motor cars, each to be offered at Bonhams single-owner Frederiksen Collection Sale, taking place 26 September.

Highlight of the series is the 1914 Rolls-Royce 40/50 Silver Ghost Skiff, estimate 7,200,000-9,200,000 DKK (£675,000-875,000). At over one hundred years old, the 40/50 H.P. Silver Ghost chassis is regarded by many as the model that earned Rolls-Royce the sobriquet "the best car in the world". Incredibly well travelled, it has been enjoyed by previous owners residing in France, Brussels, Cairo, London and California. Today, 54PB presents beautifully with lovely patina and a high degree of originality.
Also offered is an outstanding 1931 Rolls-Royce Phantom II Open Tourer – estimate 2,000,000-2,600,000 DKK (£175,000-250,000). The Phantom was once owned by famous Suffragette, Katharine McCormick. An American philanthropist, Mrs. McCormick is renowned for single-handedly financing the development of the birth control pill.
Reputedly the last model that Henry Royce designed himself, the Phantom II was announced in September 1929 with deliveries commencing immediately. Unlike its predecessor, which inherited its underpinnings from the preceding 40/50HP Silver Ghost model, the Phantom II employed an entirely new chassis laid out along the lines of that of the smaller 20HP Rolls-Royce. Built in two wheelbase lengths, this new low-slung frame enabled coachbuilders to design a sleeker, more modern body for the car.
Rolls-Royce motor cars offered in Bonhams sale include:
The Frederiksen Collection sale will take place at Lyngsbækgaard Manor, in Mols Bjerge National Park, Denmark, on Saturday 26 September 2015.
For further information, visit: bonhams.com/frederiksen
Posted by jeffharris at 16:59 No comments:

A 1970 Porsche 908/03 – factory converted to turbocharging in 1974 – with World Championship for Makes racing provenance will be offered at Bonhams Goodwood Revival Sale, estimated at £2,200,000-2,500,000.
One of the most renowned of all World Championship endurance racing Porsche sport-prototypes, this 908/03 began life as one of the legendary Gulf-JW Automotive racing team's quasi-works entries for the 1970 Targa Florio and Nürburgring 1,000Km races, co-driven respectively by Richard Attwood/Björn Waldegård and Pedro Rodriguez/Leo Kinnunen.
Chassis '11' finished 5th in the great Sicilian Targa Florio, and qualified 2nd fastest on the German Nürburgring circuit. Later sold and converted by Porsche into a 908/03 Turbo for the 1975 Martini Racing programme, chassis '11' then finished 3rd at Mugello, Italy, co-driven by Gijs van Lennep/Herbert Müller, and once again raced in the Nürburgring 1,000kms (co-driven by Kinnunen/Müller), before winning the Mainz-Finthen InterSerie race. It was later raced by Jürgen Neuhaus, Jürgen Barth, Axel Plankenhorn and Dr. Sigi Brun.
Fitted with a 660bhp twin-turbo 2146cc flat-6 cylinder engine, the car most recently finished 2nd at Ricard-Castellet in 2013, and is eligible for the Le Mans Classique, Proto Seventies and Pre-1980 endurance series events. It is offered ‘on the button’ – ready to impress!
James Knight, Bonhams International Group Motoring Director, said: “This Porsche 908/03 turbo has outstanding provenance, having been entered in nearly 30 races in-period, including the Le Mans 24-Hours, the Targa Florio, and the Monza and Nürburgring 1,000Kms. It’s now offered by Bonhams, in running order, with an estimate of £2,200,000-2,500,000.”

1970 Targa Florio, Sicily, Richard Attwood & Bjorn Waldegard, 5th overall
The super-light, super-compact 908/03 was absolutely the minimum car for the maximum engine (and driver), initially in 1970 with 3-litre flat-8-cylinder power for the twisty Targa Florio and Nürburgring courses – then for 1975 re-engined with the 2.1-litre turbocharged flat-6 to excel on circuits of all kinds, worldwide. This example’s entry for public auction provides a rare and important opportunity.
The Bonhams Goodwood Revival Sale takes place on 12 September at Goodwood Motor Circuit, Chichester, West Sussex. For more information visit:https://www.bonhams.com/departments/MOT-CAR/.
Posted by jeffharris at 16:50 No comments:

Left: 1963 Ferrari 250 GT Lusso Berlinetta, 1971 Ferrari 365 GTS/4 Daytona Spider, 1966 Ferrari 275 GTB/6C Alloy
Chris Evans, presenter, DJ, and the new host of Top Gear, has consigned 13 cars to Bonhams Goodwood Revival Sale, taking place 12 September.
Leading the series are several of Evans’ highly prized Ferraris, including the rare right-hand drive 1966 Ferrari 275 GTB/6C Alloy, estimate £2,600,000-2,900,000, the 1971 Ferrari 365 GTS/4 ‘Daytona’ Spider, estimate £2,300,000-2,600,000 and the 1964 Ferrari 250 GT/L ‘Lusso’, estimate £1,400,000-1,800,000.
Sholto Gilbertson, Bonhams Director of Motor cars, said: “Chris Evans is offering thirteen incredible motor cars at Bonhams sale, a stable which includes six outstanding Ferraris.
“Chris has been a long-standing client of Bonhams, so we’re delighted to offer his incredible motor cars at Bonhams Goodwood Revival Sale. In refreshing his collection, others will have the opportunity to enjoy Chris’ fantastic cars – after all, you never ‘own’ a classic car, you enjoy it, look after it, and pass it on for others to appreciate.”
More than 140 lots of Evans’ Automobilia will also be offered, the proceeds of which will be donated to BBC charity, Children in Need.
The motor cars offered from Chris Evans are:
Bonhams Goodwood Revival Sale takes place on 12 September in Goodwood, Chichester. For more information visit https://www.bonhams.com/departments/MOT-CAR/.
Posted by jeffharris at 16:49 No comments:

Exceptional Sports and Racing Cars at The Pebble Beach Auctions 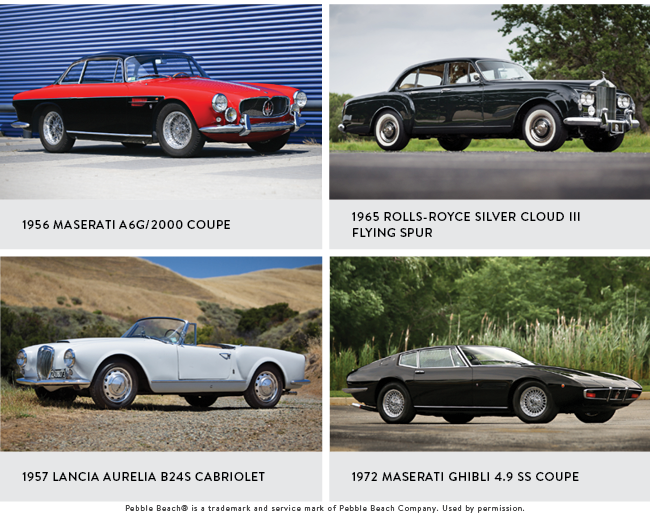 Posted by jeffharris at 21:31 No comments:

Posted by jeffharris at 21:27 No comments: 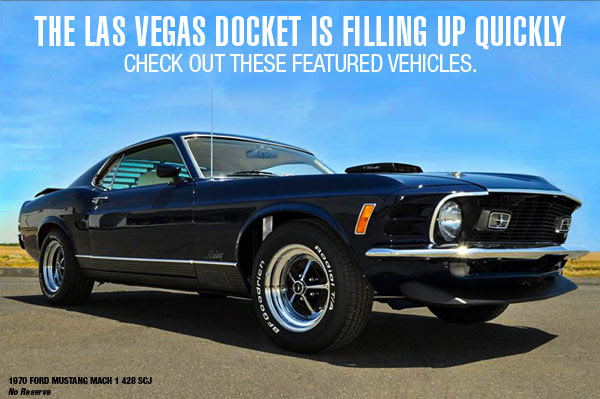 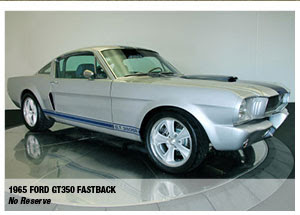 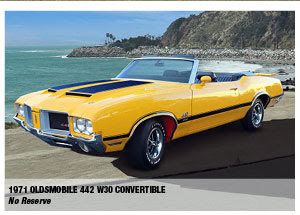 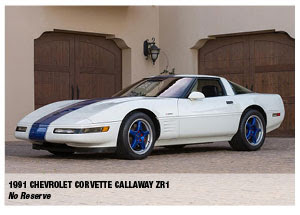 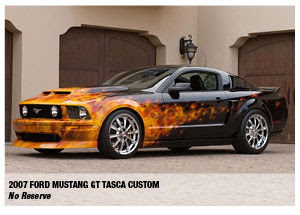 Posted by jeffharris at 21:24 No comments:

Posted by jeffharris at 21:18 No comments: