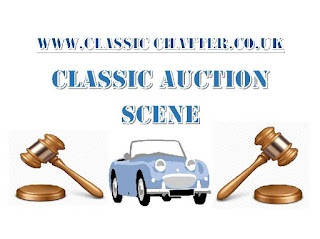 As the anticipation of one of the largest auctions for Hypercars and Supercars gathers pace, Silverstone Auctions are finalising their extraordinary catalogue of some of the most incredible high-performance cars produced.
Taking a look at a selection of the cars being offered, one of the most recent cars produced is the stunning 2019 Aston Martin Vanquish Zagato Shooting Brake, one of 99 cars produced and with 570km from new on the clock. But like all of these, cars no one is the same and this comes with the most incredible list of options to the tune of $173,961 including the Villa d’Este package. Stunningly presented in a special-order Topaz Chrome 2 with a Sahara Tan interior and detailing picked out in gold with Burl Ash veneers. This is quite a car to behold with a 6.0-litre V12 which also comes with a set of Bridge Of Weir leather fitted luggage to match the interior.
Giorgetto Giugiaro is a legendary designer who founded Italdesign in 1968 and worked with some of the major car manufacturers for the last 50 years. In 2017 they launched their first bespoke supercar, the Zerouno, limited to just five cars combining race car features for the road. Each car was built to order and this car was the last of the five to be made, as specified by a collector with an extensive private collection. This car has never been registered for the road and has only delivery and testing mileage. This is a very unique car finished in Matte Black with green, white and red stripes running the length of the car signifying its Italian origins.
Our next car is one of several Bugatti Veyrons in the auction and this is one of the most special versions built. This 2010 Veyron is the Nocturne, one of five made to celebrate 100 years of Bugatti and one that was specially developed for the Middle East market. With just 1,500km on the clock, the Nocturne is identified by the galvanised side windows that continue the polished aluminium line at the front and finishes with the wide rear wheel arches. The main differences to a standard Veyron are purely down to cosmetics, from the specially polished wheel rims to the dark magnesium dash and galvanised Platinum centre console. A stunning looking car in left-hand drive and registered in the UAE.
The final car in this release is a collaboration between Mclaren and Mercedes at a time when they were F1 partners. The Mclaren Mercedes SLR 722S Roadster was their creation, bringing together their technical knowledge to produce an awesome road car built at Mclaren’s Woking facility. Only 150 of these cars were made and very few in the white with a semi-aniline black leather interior. This 722S was delivered new to the UAE and has just 2,000km on the clock and is a very special car.
Nick Whale Silverstone Auctions’ Managing Director commented: “The list of cars we are offering is quite staggering. Some of the finest high-performance cars you can find with the most incredible list of options.”
“If you are looking for that something special for your collection then you need to be registering for this sale. Absentee bidding is available on the phone, online or by commission. There are cars here that you would struggle to find that have done so little mileage or have not even been registered.”
To find out more about the Riyadh Car Show Auction and to view the lots please visit the Silverstone Auctions website.
Forthcoming Auctions
22nd and 23rd February 2020 Race Retro Classic and Competition Car Sale – Stoneleigh
9th May - May Sale and Porsche Sale Silverstone Circuit
6th June – A Sale of Ferraris, Sywell Aerodrome
1st and 2nd August – The Silverstone Classic
14th and 15th November – NEC Classic Motor Show

Posted by jeffharris at 17:58 No comments:

Silverstone Auctions will be opening the doors to 118 classic and modern classic lots at the Lancaster Insurance Classic Motor Show from the 8th to 10th November at the NEC Birmingham.
Viewing will take place all day Friday and on the mornings of the sale on Saturday and Sunday where you can view the lots and speak with the Silverstone Auctions team.
On Saturday the car auction gets underway at 2:00pm with 62 lots set to go under the hammer. The first lot off the block will be the 1991 Golf GTi Rivage Cabriolet with all proceeds being donated to the Motor Neurone Disease Association, a charity close to the heart of the vendor and it will be offered at No Reserve. Lot 205 is the first of the star lots, the Ex-Sir Cliff Richard Corvette C2 Sting Ray Convertible, which was delivered new to the pop legend early in his career and is estimated at £50,000 to £60,000. Lot 207 is a wonderful lot to keep an eye on too, a rare 1976 Alfa Romeo Montreal. A UK -supplied right-hand drive car, one of only 155, with a warranted 45,495 miles in need of some attention. It is estimated at £22,000 to £26,000 and the registration number 600 JRL will remain with the car. Lot 215 is the first of the supercars a 1993 Jaguar XJ220 formerly owned from new by Sir John Madjeski the founder of Auto Trader. Estimated at £350,000 to £400,000 this 2,000 mile from new supercar is a very special example and looked after by XJ220 experts Don Law. The following lot 216 is a 1989 Porsche 928 GT Manual which is being sold as part of a feature for a new Channel 4 restoration show. This car has been recommissioned and inspected prior to the sale and estimated at £20,000 to £25,000. Lot 250 is another of the incredible lots being offered during the show weekend, the 1974 MGB GT V8 with just 4,425 miles on the clock. A very British rare chrome bumpered sportscar at an estimate of £30,000 to £35,000, what a great car.
Sunday’s auction has 56 lots and in amongst them are more cars with famous ownership. Four lots in will be the 1971 Mercedes-Benz 280SE 3.5 Coupe formerly owned by pop sensation Lulu, who bought the car new when she was married to Maurice Gibb of the BeeGees. This Mercedes has been with the current vendor forming part of a significant collection where it has been enjoyed and used for social events. It is being offered with an estimate of £65,000 to £75,000. The star lot of the day has to be Lot 411 the 1955 Triumph TR2 ex-works Le Mans 24 hours team car. Purchased straight after the race by King Hussein of Jordan and has since been with the current owner for the last 47 years. Estimated at £100,000 to £140,000 this is a wonderful piece of British motorsport history with superb provenance and well-documented history.
Across both sale days, the selection and provenance of the cars are quite staggering. There is a wide selection of Aston Martins from different eras and models, the most famous being the DB5s of which there are two outstanding cars, there is also a rare and desirable DB2 Washboard, two DB6s, a beautiful 1968 DBS, a 1984 V8 Vantage Volante and the 1994 Widebodied Virage Volante. If you are an Aston enthusiast, then there will certainly be a car for you.
The star-studded line up continues, not content with cars formerly owned by Sir Cliff Richard and Lulu, but there are two cars from the famous and eclectic collection of Jamiroquai frontman Jay Kay, Lot 237 a 1983 Mercedes-Benz 280 TE Estate and Lot 245 a Porsche 928 GTS. If you fancy something a bit more rugged, you can bid for Lot 259 a 1994 Range Rover Limousine once used to ferry around boxing champion Mike Tyson.
Among the 118 lots are several future classics, one model that has shown great form in recent auctions is the BMW 325i and there are three in the sale. Two of them are 1991 E30 cars a Sport and a Sport M-Tech2, the other a 1986 E30 Sport M-Tech1. Fast Fords are always popular and there is plenty of choice with some outstanding examples being offered such as the 33,984 miles 1983 Escort RS1600i from the BonkeRS Collection. If you after a French hot hatch Lot 403, a 1989 Peugeot 205 GTi 1.6 is in exceptional condition and estimated at £15,000 to £18,000 with just 27,815 miles from new.
Harry Whale Silverstone Auctions’ Sales Manager commented: “We have so many cars on offer this coming weekend, all with wonderful provenance and connections to some of the UK's most famous celebrities.”
“This is a great catalogue, one we are very proud to be offering. These are all high-quality cars to suit all budgets, whether you are after a standout example from Aston Martin or after a restoration or re-commissioning project, our team look forward to meeting potential bidders at the weekend.”
The Silverstone Auctions sale will also include 100 lots on each day of automobilia to include wall art, watches, signed prints, tool kits, luggage sets and registration numbers.
The Silverstone Auctions sale takes place on the 9th and 10th November at the Lancaster Insurance Classic Car Show, NEC, Birmingham. On each day, the automobilia and lifestyle auctions start at 11am and the car auction starts at 2pm. (Remembrance Sunday 10th November, the automobilia auction will begin at 11.05am)
Posted by jeffharris at 18:03 No comments: 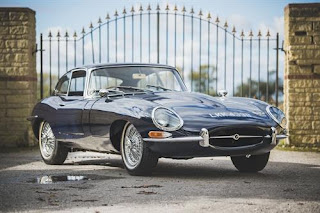 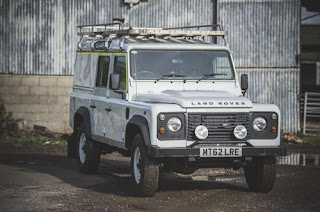 Classic car auction disruptor, The Market, has achieved industry-leading results once again with a sales rate of 80 per cent during the month of October, whilst also achieving its highest ever total sales of £486,485.
“October has been a fantastic month at The Market with a record-breaking total sales figure approaching half a million pounds,” comments Tristan Judge, director, The Market.
“We also had a wonderfully varied selection of no reserve cars last month, which demonstrates not only the quality of lots for auction but also the confidence of our customers in our online platform and app. Like the original, online-only classic car auction house, our results show that we are continuing to out-performing many traditional auction houses.”
Highlights of the October auctions include a restored, right-hand drive 1964 Jaguar E-Type S1 3.8 FHC finished in Dark Blue with matching leather interior, which had spent the majority of its life in the warm Cypriot climate. Offered at no reserve, the E-Type sold after more than forty bids for £61,513.
Another E-Type, also offered at no reserve, was a right-hand drive 1972 Jaguar E-Type SIII V12 FHC  in Ascot Fawn with a red leather interior in wonderfully original condition. Also benefitting from dryer weather conditions having spent 42 years in Arizona, it sold for £38,900.
From another famous British marque, a 2013 Land Rover Defender 110 TD Utility Wagon, used by the British Red Cross and complete with full-length Patriot roof-mounted storage rack, cage storage, tow-bar, ladder and a host of other practical features, sold for £23,400.
“We believe that auctions deliver the correct, current value for a classic car, especially when accompanied by accurate estimates. We’re continuing to see consistent, high sales rates month by month as well as increasing demand from customers to sell with us,” concludes Tristan.
Other October results include a low ownership, US market 1967 Austin-Healey 3000 MK3 which sold for £28,745, a 1994 Porsche 968 Sport, the second-to-last car to roll off the Clubsport/Sport production line, which sold for £15,637, and an exquisitely maintained 1993 Jaguar XJS Convertible 4.0 Auto which sold for £12,000.
Classic car owners looking to sell their car with The Market benefit from just 5 per cent sellers’ commission and no entry fee, while buyers only pay what they bid with no fees.
To see all the results from The Market’s October auctions visit https://themarket.co.uk/ or download the free app from Apple Store or Google Play.
Posted by jeffharris at 17:24 No comments: