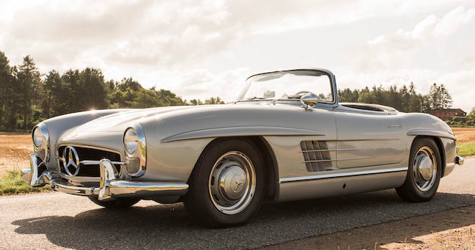 Bonhams inaugural sale at Padua on 28 October achieved a total in excess of €3,000,000. The two most valuable consignments found buyers: the striking 1957 Mercedes-Benz 300 SL Roadster was the top lot and, after a prolonged three-way bidding battle, the exquisite motor car sold for €897,000 to an international online bidder and a round of applause. Runner up for top honours was the 1960 Maserati 3500 GT Spyder, one of only 242 ever created by Vignale, selling for €638,250 to a bidder in the room after a lengthy bidding exchange. Other high-achieving Italians included the 1963 Fiat-Abarth Monomille GT Coupé (€103,500), and the1968 Alfa Romeo 2600 Spider (€105,800).

Gregor Wenner, Bonhams Head of Sale for the Padua Auction, commented: ‘’We saw some fantastic results at the weekend, and are very pleased with our first foray in to both Padua and Auto e Moto d’Epoca. The auction was extremely well-attended, and we were delighted to be partnering with such a celebrated and widely-attended event on the European motoring scene. The organisers were fantastic hosts for Bonhams and we were thrilled for the auction to be placed at the very centre of the action, allowing us to reach the 115,000 attendees over the course of the weekend. The price achieved for the beautiful 300 SL shows that the Italian collectors’ car market remains very strong indeed.’

Bonhams next sale is the London to Brighton Run Sale on Friday 3 November, at its flagship New Bond Street saleroom.
Posted by jeffharris at 10:26 No comments:

·        Frequently updated list of entries for the ICONS sale available at www.rmsothebys.com

NEW YORK (27 October 2017) – RM Sotheby’s is thrilled to announce early highlights for its final auction event of the year – ICONS, set for 6 December at Sotheby’s global headquarters in Manhattan. This third iteration of the company’s New York sale will celebrate the cutting edge of automotive design, presenting an expertly curated roster of more than 30 of history’s most iconic automobiles from the world’s most admired marques.

Latest entries for the sale are led by a 2000 BMW Z8, chassis no. 60085, originally owned by late visionary Apple founder, Steve Jobs. Before his untimely passing in 2011, Steve Jobs and Apple remained true to the mantra, “Think Different” and contributed unimaginably to intuitive and elegant technology that revolutionized how people interact with computers, consume music, and with the masterstroke of the iPhone—communicate. BMW was also thinking differently when they released the Z8 in 2000. The model served as the brand’s halo car and a test bed for new engineering technologies, demonstrating where high-performance automobiles could be heading in the 21st century. Pulling styling cues from the lauded 507, yet equally forward-looking, the Z8 pioneered an advanced technique of welded and extruded aluminium space frame construction. With abundant modern amenities and 400 bhp on tap, those lucky enough to own a Z8 new were left wanting for nothing. Widely considered one of the most innovative and attractive cars of the new millennium, the Z8 quickly joined the ranks of the “modern classic.”

At its time the pinnacle of BMW design and technology, the Z8 unsurprisingly attracted Steve Jobs. While not a car enthusiast per se, Jobs did have a penchant for German design, owning both BMW cars and motorcycles, as well as Mercedes-Benz SLs. It was reportedly Larry Ellison, iconoclastic CEO of Oracle, who convinced Jobs that the Z8 was a paragon of modern automotive engineering and reflective of his own products and psyche. Jobs’ Z8 was delivered on 6 October 2000 in his signature minimalist style and colour finished in Titanium over Black leather interior. His ownership is documented by several service invoices accompanying the car, as well as a copy of the original California registration in his name and at his personal residence. This is significant as Jobs rarely registered his cars to protect his anonymity, holding on to them less than six months. He kept the BMW until 2003, when it was sold to it's second and now current owner, who sold the car to another tech executive in 2004 and quickly suffered from seller’s remorse, buying it back a mere eighteen months later.

Without a doubt BMW’s most iconic car of the 21st century, the Z8 has resided in California all its life, and comes to RM Sotheby’s ICONS sale in exemplary condition, having been driven just 15,200 miles from new. It is offered with a plethora of important accessories, including its proper hardtop and hardtop stand, car cover, owner’s and service manuals, two keys, navigation CDs and, ironically, its BMW-branded Motorola cell phone, used by Jobs. Perhaps unsurprisingly, he was known to have hated that phone (Estimate: $300,000 - $400,000 offered without reserve).
“Not only was the Z8 the halo car for an iconic brand and the Bond car for a generation, but it caught the eye of the most iconic and influential entrepreneur of our time,” says Don Rose, Car Specialist, RM Sotheby’s. “Jobs’ legacy is all around us, with over one billion iPhones sold to date. However, he only owned one Z8, and this is that car. The BMW is a perfect fit within our ICONS event while making it difficult to determine whether the icon, in this case, is the car or the man… I say both!”

Additional iconic highlights for the New York sale include:

·        An exceptionally restored, factory “triple black” 1966 Jaguar E-Type Series I 4.2-Litre Roadster, chassis no. 1E 13575 complete with hardtop and matching-numbers engine; a stunning example of one of the most famous and instantly recognizable mechanical shapes ever created (Est. $250,000 - $325,000, offered without reserve).

RM Sotheby’s ICONS sale is part of a weeklong celebration of auctions and events, entitled “A Life of Luxury”, surrounding the newly established Sotheby's Luxury Division, with the exhibition opening 30 November. One of the most unique auction events of its kind, “A Life of Luxury” offers clients and enthusiasts an unparalleled experience at the heart of the auction world spread across jewels, watches, wine, fashion, and of course—cars. For further information or to view a frequently updated list of entries for the 6 December sale, please visit www.rmsothebys.com. Call +1 519 352 4575 to speak to an RM Sotheby’s car specialist about limited remaining consignment opportunities.
Posted by jeffharris at 16:35 No comments:

Posted by jeffharris at 16:21 No comments:

Posted by jeffharris at 16:17 No comments: