A Harley-Davidson motorcycle blessed with the signature of Pope Emeritus Benedict XVI, and later received by Pope Francis, is to be sold for charity at Bonhams 5 February Paris Sale.
The motorcycle is to be offered as part of Bonhams Grand Palais auction, entered at no reserve, with an estimate of €15,000-25,000 (£11,700-19,600).
In a special countdown to Harley-Davidson’s 110th anniversary celebrations, two commemorative motorcycle petrol tanks were presented to Pope Emeritus Benedict XVI.
These were signed, and returned to the motorcycle legends US headquarters where they were mounted to their respective motorcycles. Of these, one remains in the Harley-Davidson museum in Milwaukee, USA. The remaining motorcycle – the FLSTC 103 Heritage Softail Classic destined for Bonhams 2015 sale - lay waiting for a special ceremony where it would be presented to the Pope in front of tens-of thousands of Harley-Davidson riders at 2013s 110th anniversary celebration.
However, in an unforeseen change to the papacy, Pope Emeritus Benedict XVI abdicated in January 2013. Subsequently this saw the Softail Classic presented to the newly inaugurated Pope, his holiness Pope Francis.
“It’s an honour to have been selected to sell this fantastic machine. We expect a lot of interest, and hope to raise some spirited bidding for the very worthy charity selected,” said Ben Walker, International Director for Bonhams Motorcycle Department.

“In February 2014, Bonhams sold 1,585cc Harley-Davidson Dyna Super Glide signed by His Holiness Pope Francis. Now we’re delighted to offer a motorcycle received by both Pope Francis and Pope Emeritus Benedict XVI; it was present during a pivotal period in the papacy of the Catholic Church, and we expect a lot of interest in it.”
Entered at no reserve, this unique motorcycle will have its auction proceeds donated to Stowarzyszenie Przyjazny Świat Dziecka (Friendly World Association), a Polish volunteer, independent, non-profit organization that offers care and support to children and families in need.
The Harley-Davidson will be sold on 5 February 2015 as part of Bonhams’ Les Grandes Marques du Monde sale at the Grand Palais in Paris.
With some incredible vehicles already confirmed, Bonhams is still accepting select consignments for the Grand Palais Sale. Sellers interested in consigning rare and important motorcycles to this internationally attended auction can contact Bonhams motorcycle representatives at: https://www.bonhams.com/departments/MOT-CYC/.
Posted by jeffharris at 16:10 No comments:

LES GRANDES MARQUES, INTERCLASSICS & TOPMOBI
MECC, MAASTRICHT, THE NETHERLANDS
TO BE OFFERED FOR SALE WITHOUT RESERVE 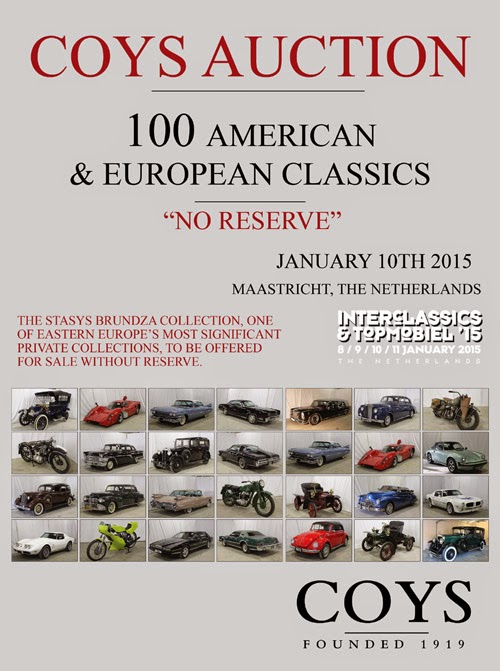 WEBSITE: COYS AUCTIONS
Posted by jeffharris at 09:57 No comments:

LONDON (November 25, 2014) – RM Auctions, the world’s largest collector car auction house for investment-quality automobiles, makes a highly anticipated return to Paris, 4 February for its second annual sale during the world-famous Retromobile show week. Featuring a handpicked selection of 60 motor cars, the boutique auction will be held at the historic Place Vauban in central Paris, the perfect setting to present the finest examples of racing, sports and touring cars from both pre- and post-war periods.
The sale is set to open RM’s 2015 European calendar in spectacular fashion, following on from a record 2014, which saw quality collector cars in high demand and prices remain firm. The sale also follows in the footsteps of RM’s highly successful debut in Paris in 2014, an event that achieved €17.7 million in sales, with five exceptional automobiles exceeding €1 million. Attracting bidders from 34 countries, top sale honours at the 2014 event went to a beautifully presented 1955 Jaguar D-Type, which realized a record €3.696.000.
“The Paris sale is a significant addition to our worldwide roster of events, held during one of France’s most important motoring weeks of the year. Place Vauban provides a stunning backdrop to present nearly a century of automotive history, and allows RM to create a premium experience for discerning collectors, executed at the same level as a high-end art auction,” says Augustin Sabatié-Garat, Car Specialist, RM Auctions.
Sabatié-Garat adds, “We’ve continued to witness a strong market for collector cars over the past year with prices for select automobiles reaching the levels of fine art and we expect this trend to continue in 2015. Cars are increasingly being recognized and celebrated as rolling sculptures, and for collectors, there’s then the added benefit and excitement of getting behind the wheel.”
Drawing ties to France’s rich automotive history, highlights for RM’s Paris sale are led by a wonderful 1935 Delahaye 135 S. A historic car with an incredible racing history, the Delahaye has resided in France all of its life, including many years in the ownership of Jean-Philippe Peugeot, of the Peugeot Motor Company. One of the truly great French sports racing cars of the pre-war period, it enjoyed a competitive racing career from 1936 through 1949, posting strong results at Grand Prix events throughout the 1940s, including victory at the Grand Prix des Frontières.  A veteran of no less than three 24 Heures du Mans, the car’s most notable performance came in 1937 when Joseph Paul and Marcel Mongin piloted it to 2nd position overall in the legendary endurance race.  For decades, the 135 S has been a familiar sight on the international classic car scene, competing in many of the world's leading historic races and retrospectives driven by its well-known former owner, Jean Sage (Est. €1.200.000 - €1.600.000).
Also set to command strong local interest at the February auction is the 1934 Lancia Belna Eclipse. A true rolling work of art, the Lancia features coachwork by Pourtout and dramatic Art Deco design by the intriguing and highly-talented, Georges Paulin, a dentist who sketched many of the most beautiful French automobiles of the pre-war period and went on to become a hero of the French Resistance.
Paulin was a pioneer of aerodynamic design and new ideas in coach-building, most prominently, one of the world’s first retractable hardtops, which he dubbed “Eclipse.” The patented design was simple and effective and was mainly utilized by French coachbuilder Marcel Pourtout up to the outbreak of World War II. Paulin then joined the Resistance movement, passing secrets along to agents who would come to his dental office, until he was tragically captured and executed on March 21, 1942.
The Lancia on offer is one of only two known examples featuring the Pourtout-built Eclipse coachwork. Built on a French-manufactured Belna chassis, the car has been restored to feature striking black and bright yellow paintwork with a genuine ostrich skin interior (Est. €300.000 - €375.000).
RM’s Paris sale will also feature a number of cars that adorned the walls of young enthusiasts during the 1980s and 1990s, a previously underappreciated group that has enjoyed rising popularity and values in recent years. Superb “poster cars” slated for the podium include a single-owner-from-new 1990 Ferrari F40 (Est. €900.000 - €1.300.000), a late production 1989 Lamborghini Countach 25th Anniversary, possibly the fastest iteration of the model (Est. €250.000 - €300.000), and an iconic 1983 Ferrari 512BBi presented in pristine condition in the highly desirable Rosso Corsa with black trim (Est. €190.000 - €230.000).
Adding to the excitement, RM’s Paris auction is held in partnership with the Festival Automobile International, taking place at Place Vauban just prior to the sale. Celebrating its 30th anniversary in 2015, the event will gather a stunning display of beautiful concept cars and pay tribute to car designers from around the world, following the vote for “The Most Beautiful Car of 2014” (www.festivalautomobile.com).
Full event details for RM’s Paris sale are available by visiting www.rmauctions.com or calling RM’s London office at

SANTA MONICA, Calif. (November 18, 2014) – Gooding & Company, the auction house acclaimed for selling the world’s most significant and valuable collector cars, is delighted to present an exceptional ensemble of motorcars at its annual two-day Scottsdale Auctions on January 16 and 17, 2015. Appearing in this impressive roster is a wonderfully original 1960 Alfa Romeo Giulietta Sprint Zagato, a rare-to-market Porsche 959 Sport with an exclusive factory power upgrade as well as a Formula 1 Ferrari 641/2 with a rich racing history and museum-worthy design.

A truly exciting find for connoisseurs of Italian cars, this wonderfully original Alfa Romeo Giulietta Sprint Zagato is one of approximately 200 built and displays supreme panache. With its extensive race history and original Zagato coachwork, it’s a fascinating time capsule of the 1960s Italian racing scene. The SZ competed in several important events including the 1961, 1962 and 1963 editions of the Targa Florio, the legendary Sicilian road race. In both the April 1961 and May 1962 races the SZ was manned by noted drivers Gianni Bulgari and Maurizio Grana, who went on to pilot other exciting Italian GTs, such as the Alfa Romeo TZ and the Ferrari GTO. Hidden away since its arrival in the United States 50 years ago, this Giulietta SZ is being offered for public sale for the first time, presenting collectors with a rare opportunity to acquire an important Zagato-bodied Alfa Romeo with both a rich racing history and exceptional patina.

A world-class supercar, the 959 Sport is the ultimate evolution of this landmark Porsche model. One of only twenty-nine Sport models produced, and one of only eleven specified in Grand Prix White, this rare and desirable 959 is a remarkably correct and original example with 19,000 miles from new, a recent factory service and extensive documentation. Significantly, this particular 959 Sport benefits from the factory-installed Stage II power upgrade that increased horsepower from the standard 450 hp to 540 hp, elevating an already superlative supercar into an even more rare and extraordinary class.

A pivotal point in the evolution of Ferrari Formula 1 racing cars, this Ferrari 641/2 is defined by its sleek and lustrous silhouette crafted by prominent F1 designer, John Barnard. The Museum of Modern Art recently recognized its level of artistic and cultural significance by exhibiting the Ferrari as a prominent lobby display. Notably, this 641/2 was driven by legendary British F1 driver and Formula One World Champion, “Il Leone” Nigel Mansell. Most importantly, Mansell and the 641/2 raced to victory in the 1990 Portuguese Grand Prix, finishing over two seconds ahead of the competition. This sculptural racing machine is equipped with the evolutionary sequential gearbox and celebrated Ferrari V-12 racing powerplant, which lead the industry in innovation and optimal performance.
Gooding & Company will also showcase several Italian originals like the unaltered 1956 Maserati A6G/2000 Coupe, a superbly authentic 1970 Ferrari Dino 246 GT, as well as flex major American muscle with two highly documented Chevrolet Yenko Super Camaros on the blocks.

Posted by jeffharris at 17:39 No comments:

Posted by jeffharris at 17:30 No comments: