LEGENDARY MASERATI GOES UNDER THE HAMMER

LEGENDARY MASERATI GOES UNDER THE HAMMER 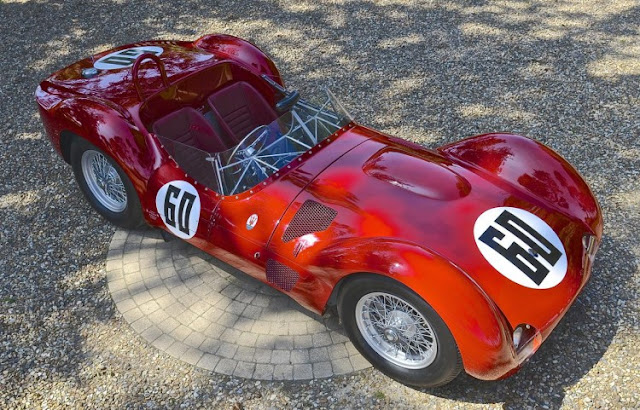 The legendary 1959 Maserati Tipo 60/61 ‘Birdcage’ which was prepared for racing by Alfred Momo is to be sold by international car auctioneers Coys at their Schloss Dyck auction in Germany on the 4th of August.
This historic Maserati is a light and powerful sports racer produced in 1959-1960 that exhibits superb aerodynamics. It acquired its nickname ‘Birdcage’ because of the exceptional design engineered by Giulio Alfieri. It has an intricate tubular frame and chassis made up of approximately 200 small diameters, chrome-molybdenum steel tubes of varying lengths and thicknesses welded together with a unique Italian process.
In 2010 the car was submitted to the MSA, and gained its Historic Technical Passport/FIA class: TSRC4 documents, allowing it to be raced in many different venues throughout the world which could even include Classic Le Mans, Goodwood Revival, and Motor Racing Legends Stirling Moss Trophy at various circuits globally.
Chris Routledge, CEO of Coys said, “This car offers a collector a chance to own a unique race car. It is going to be sold with a large amount of documentation, photographs, full rebuild invoices from Steve Hart Racing and confirmation of the cars original components used directly from Momo.”
Another one of Giulio Alffieri’s epic design on sale is a 1963 Maserati 3500 GTi Superleggera by Touring. The car is finished in arguably the best colour combination for a 3500 – gunmetal grey over red this wonderful example of the marque is also reported to be in excellent mechanical order. Its estimate is €178,875.
The 1921 Wolseley 200-Mile Record Car Evocation was built by one of Britain’s biggest motorcar manufacturer at the outbreak of World War One, Wolseley. This car was acquired by Stephen Battye for his impressive Yorkshire Car Museum during 2003, it was carefully stripped and reassembled after a period of dry storage. It is now on sale and estimates €35,000- €42,000.
Also going under the hammer is one of only 576 made in the Magna line; a 1933 MG L-Type Magna Tourer. It was first registered in Germany in 1986. This Magna had only three previous owners in Germany; in 1999 the engine was overhauled for 7,700 DM. This fantastic MG Magna subsequently went on to win the historic Klausen mountain race. It estimates €60,000- €80,000.
Other cars on sale:
1977 Maserati Bora 4.9 – An excellent restored and desirable 4.9 specification car, mechanically rebuilt, just serviced and in excellent all-round condition. Estimate: €140,000- €180,000.
2003 Porsche 996 GT3 CUP - This GT3 was produced and delivered as a proper GT3 CUP car and campaigned in 23 races in Europe, as shown in its DMSB – Wagenpass. The engine was rebuilt 500 kms ago as was the gearbox. Its total mileage is less than 14,000 kms. Estimate: €60,000- €70,000.

Posted by jeffharris at 20:42 No comments: 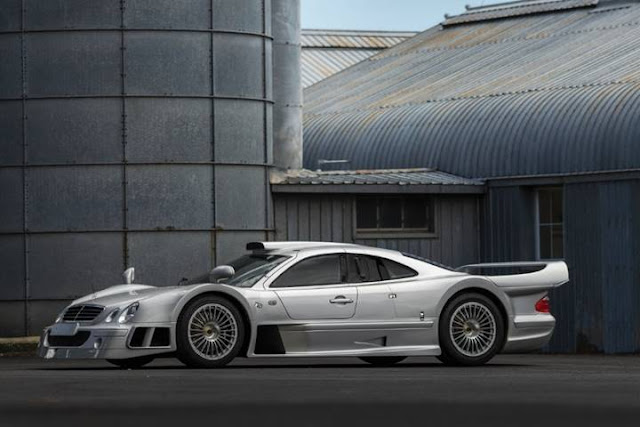 RM Sotheby’s has announced final headline entries for its Monterey sale, 24-25 August at the newly renovated Monterey Conference Center. Adding to what is already the company’s most historic auction offering to date, RM Sotheby’s has secured an incredibly rare 1998 Mercedes-Benz AMG CLK GTR, serial no. 09/25. The CLK GTR joins an unparalleled lineup of 150 exceptional motor cars set for RM Sotheby’s 2018 Monterey sale, of which no less than 35 carry individual pre-sale estimates exceeding $1 million. All entries for the auction can now be viewed in the complete Monterey digital catalogue, available here.

The GT1-era of the 1990s was the stuff of motorsports legend. Initially intended to be a series for modified road cars and gentlemen drivers, the class saw major manufacturers like McLaren, Mercedes-Benz, and Porsche throwing the full weight of their expertise towards factory-built race cars meant to do nothing but win the FIA GT1 Championship. No car was more dominant in that era than the CLK GTR, whose unmatched performance in the 1997 and 1998 season caused every manufacturer to effectively go back to the drawing board to begin anew.

Born from the very spirit of its most historic and significant predecessors such as the Ferrari GTO and Ford GT models of the early 1960s, the GT1 class comprised what were effectively road cars modified into race cars. Manufacturers could enter any “road car” they wished so long as at least 25 examples had been built for homologation purposes — this was Mercedes-Benz’s window. While raced against modified road cars, such as the McLaren F1, the Mercedes-Benz AMG CLK GTR was engineered from the ground up as a purpose-built race car. The main difference between the CLK road car and race car was the engine, which was a 6-Liter V-12 in the race car, and a 6.9-Liter V-12 in the road car. This massive powerplant produced over 600 hp, routed to the rear wheels through a sequential paddle shift gear box. Weighing just over 3,000 lbs., this street-legal Mercedes-Benz is capable of 0-100 mph in a little over six seconds, on to a top speed of 214 mph.

This car, serial no. 09/25, is the last of the true hypercar-race cars, with a performance that rivals the latest and greatest offerings from the world’s top manufacturers. The ninth of just 25 examples built (of which 20 were coupes), this CLK GTR has led a charmed life, having had just three owners and showing shows less than 1,500 original kms since new. Fastidiously maintained, the car has been recently imported to the U.S. under the Show or Display exemption and federalized for all 50 states. It is believed that of the original 25, less than six cars are federally legal within the United States, with this being one. Offered in as-new condition, the turn-key example is ready for its next stage in greatness. Perhaps no other modern Mercedes more closely embodies the heritage of the Star and Laurel’s spirit of racing, engineering and competition; a near impossible feat to surpass since the advent of the famed 300 SL Gullwing (Est. $4,250,000 - $5,250,000) 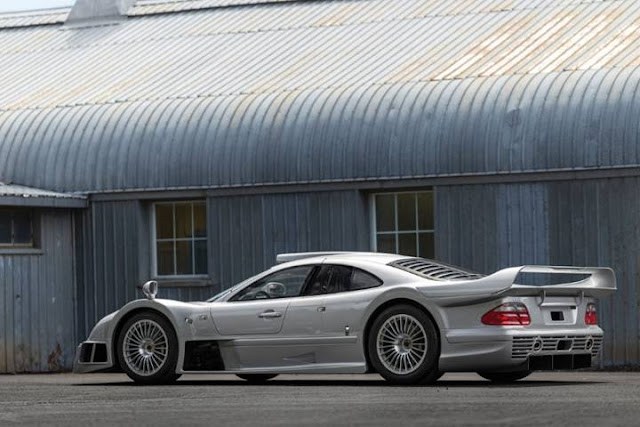 “Unequivocally, the CLK GTR represents the most undervalued and silently underappreciated supercar of the Modern Era,” says Shelby Myers, Car Specialist, RM Sotheby’s. “Considering that it is one of the rarest high-performance production cars of its contemporaries—only 25 exist worldwide, at nearly one fourth the price of a McLaren F1, of which there are more than 60, it is only a matter of time before the model escalates to near equal market value as the $20,000,000 supercars”.

Myers continues: “Marked by what I would say is some of the most extreme yet physically attractive bodywork on a post-War sports and GT car, originally built for homologation in GT Championship racing, and in virtually flawless overall condition, I firmly believe the CLK GTR offered in our Monterey auction represents the ultimate in collector car investment and long-term value collectability”.

Final highlights for Monterey are entirely German-bred. RM Sotheby’s is also proud to be partnering with Mercedes-AMG to offer a never-raced 2017 Mercedes-AMG GT3 ‘Laureus’ in Monterey, chassis no. GT3 190-17 050, with proceeds to benefit the Laureus Sport for Good Foundation. Active in over 40 countries with support from numerous athletes on over 100 projects, the foundation aims to use the power of sports to support disadvantaged children worldwide. A one-off example of a proven victor in Mercedes-AMG’s GT racing efforts, this GT3 boasts special chrome paintwork, a performance exhaust system lacking mufflers, and exposed carbon fibre parts inside and out. Offering exceptional levels of performance and perhaps the most attractive bodywork on today’s GT3 grid, this Mercedes-AMG represents a wonderful opportunity to support a worthy cause (Est. $400,000 - $600,000, offered without reserve).

Rounding out the catalogue in spectacular fashion is one of the “giant killers”. A hugely significant piece of Porsche’s American racing history, RM Sotheby’s has added a 1957 Porsche 550A Spyder, chassis no. 550A-0116 to the Monterey lineup. By 1957, the 550 model had already found an eager customer base in North America, and chassis 0116 was delivered new to Jack McAfee of Burbank, California, who raced the car extensively on the West Coast in period. Driven and owned by some of the leading West Coast personalities through the 1990s, the 550A was subsequently comprehensively restored by marque experts in Germany. A class winner at the 2014 Amelia Island Concours d’Elegance under current ownership, the extensively documented and coveted Porsche remains highly eligible for vintage racing and international Concours (Est. $4,600,000 - $5,000,000).

Held during the world-famous Pebble Beach Concours d’Elegance motoring week, RM Sotheby’s Monterey sale (24-25 August), has been the pinnacle of collector car auctions for more than 30 years, leading the field and raising the bar with its consistent, record-setting results. This year’s Monterey sale is set at the newly reopened Monterey Conference Center following its $60-million-dollar renovation, offering collectors a stunning new experience and a beautiful space for the display and offering of 150 of the world’s most important motor cars in the ultimate collector car destination.

For additional information on the latest Monterey highlights, event information, the complete digital catalogue, or to register to bid, please visit rmsothebys.com. Interested bidders are invited to speak with an RM Sotheby’s car specialist at +1 519 352 4575.
Posted by jeffharris at 12:57 No comments:

CULVER CITY, California (24 July 2018) – Fresh on the heels of more exciting news for the company’s flagship West Coast event, RM Sotheby’s is delighted to announce the addition of a Los Angeles auction to its growing global calendar, to be held at the world-renowned Petersen Automotive Museum, Saturday, 8 December.
For the past five years, the RM Sotheby’s Group has hosted it’s Southern California event in Santa Monica under the RM Auctions and former Auctions America banner. Moving to the Petersen in LA proper for 2018, the caliber of the event will be akin to RM Sotheby’s groundbreaking, watershed, New York collector car auctions, held biannually at Sotheby’s global headquarters in Manhattan (Art of the Automobile in 2013, Driven by Disruption in 2015, and ICONS in 2017). The Los Angeles sale will feature approximately 50-60 blue-chip automobiles, hand-selected by RM Sotheby’s global team of 30 car specialists.
Southern California is a hotbed for car culture in the United States, and Los Angeles captures not only diverse collecting tastes, but also all the hobby has to offer, from ocean-view driving along the Pacific Coast Highway, to carving through the technical courses provided by local canyons. Coupled with the amenities of a world-class international city, RM Sotheby’s Los Angeles auction will certainly provide a destination weekend for bidders from around the world.
The Petersen, one of the world’s premier automotive museums housing hundreds of rare and collectible cars, is the perfect backdrop for this sale focusing on some of the hobby’s most sought-after automobiles. Since its inception in 1994, the Petersen Automotive Museum has played host to exhibits that have captured the attention of the automotive world. The Museum currently houses “The Porsche Effect,” which includes dozens of the marque’s finest street and racing cars, as well as “The Roots of Monozukuri,” exploring the craft and history of Japanese cars.
“We’ve enjoyed a longstanding relationship with the entire team of passionate enthusiasts at the Petersen Automotive Museum, and I cannot think of a better auction venue in LA,” says Alexander Weaver, Car Specialist, RM Sotheby’s. “Our Saturday auction will draw the automotive faithful for an evening of rare ownership opportunities coupled with a feast for the eyes inside the Petersen. We look forward to bringing collectors together for this special event on the West Coast as we have on the East.”
Additional early entries for the Los Angeles auction will be available in the coming weeks. For further event information, please visit rmsothebys.com. To speak with an RM Sotheby’s car specialist about entering your important motor car in the Los Angeles auction, please call +1 519 352 4575.

Posted by jeffharris at 16:56 No comments: