Posted by jeffharris at 12:29 No comments:

Posted by jeffharris at 12:27 No comments:

A DECADE OF STYLE: MAGNIFICENT PRE-WAR MERCEDES OF THE 1930S LEADS BONHAMS SALE

A DECADE OF STYLE: MAGNIFICENT PRE-WAR
MERCEDES OF THE 1930S LEADS BONHAMS SALE 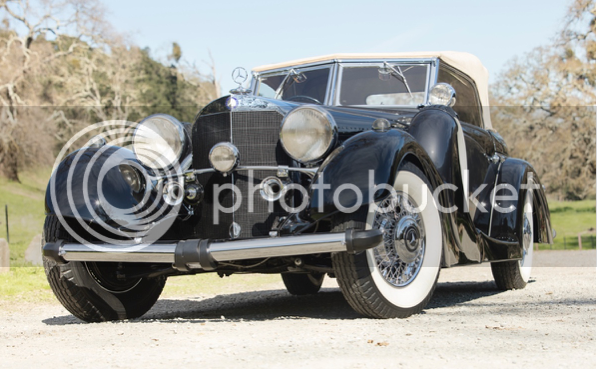 Bonhams Mercedes-Benz sale is led by fashionable automobiles of the sensational 1930s, headed by a rare 1935 Mercedes-Benz 500 K Cabriolet, estimated at €6,000,000-7,000,000.
The 1935 Mercedes-Benz 500 K Cabriolet was displayed at the 1935 Paris Auto Show as a mere chassis, and despite its stripped down state, was purchased straight off the stand. This swift acquisition was down to some good-natured rivalry between friends, Dr. Charles Crocker, and Lawrence Copley Thaw, which resulted in Thaw purchasing a Rolls-Royce chassis, and Crocker the 500 K chassis.
It was an exclusive and powerful chassis aimed at an equally exclusive and powerful clientele. With this in mind, and in a bid to outdo his friend, Crocker took the bare 500 K chassis to have a hand-crafted body built by one of the greatest and most fashionable coachbuilders of the time, Jacques Saoutchik, who was based in Paris.
Saoutchik was a carpenter by trade, so the coachwork he created was noted for the superior quality of workmanship, and beauty of the interior marquetry. His customers were everything from glittering socialites, artists, and couturiers, to royalty and heads of state. The owner of a chassis equipped with a Saoutchik body signaled good taste and great wealth.
Philip Kantor, Bonhams European Head of Motoring, said: “It is reported that on taking delivery of the chassis, Saoutchik declared that he would build a body for the Mercedes that would be, ‘As handsomely received half a century from now as it will today.’ And he fulfilled his promise: what remains today is magnificent."
Referred to by its original owner as ‘the magnificent vehicle’, the 500 K is estimated at €6,000,000-7,000,000.
FURTHER HIGHLIGHTS
The roaring motoring machines of the 1930s were grand, exquisitely designed and well engineered. The Art Deco movement was still in full swing, an influence that can be seen on some of the highlights offered at Bonhams Mercedes-Benz Sale. 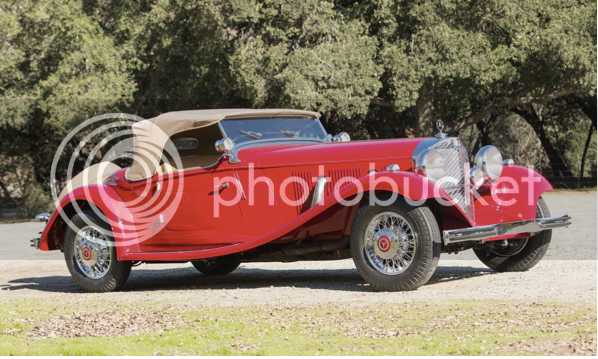 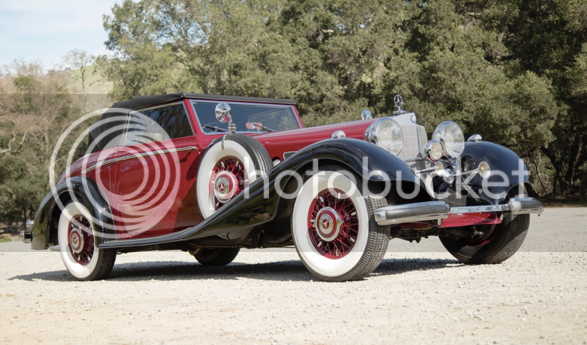 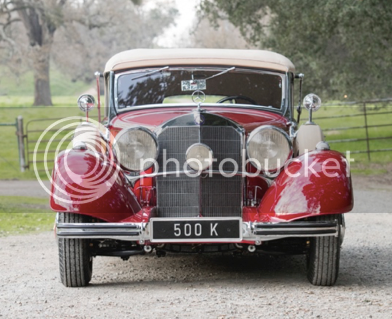 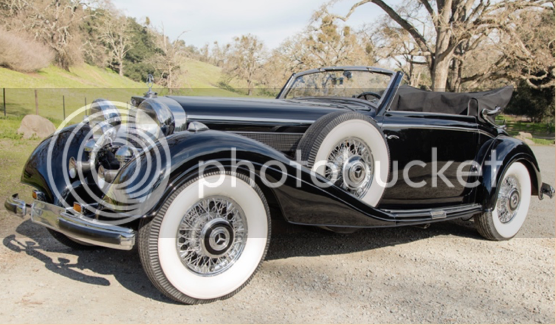 Posted by jeffharris at 12:12 No comments: 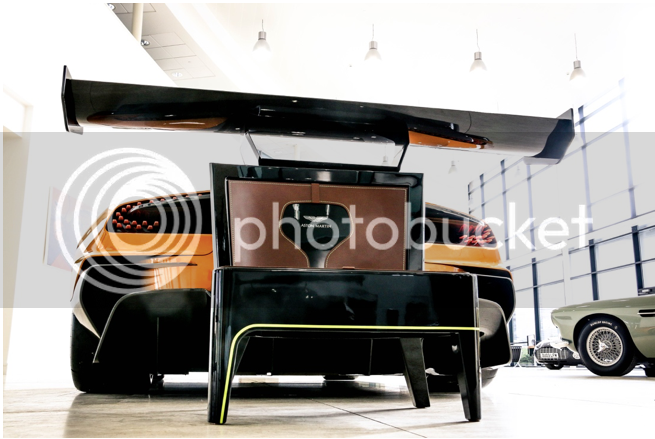 The Aston Martin designers have revealed their contribution to Bonhams’ charity chair auction in aid of CHIVA Africa, a leading AIDS charity focused on improving the lives of children and teenagers living with HIV in South Africa.
Using their skill and expert craftsmanship, the Aston Martin designers have developed a chair that is both luxurious and stylish; the perfect homage to their automotive lineage.
The CHIVA Chair is furnished with the same materials one would find on a modern Aston Martin. Highly polished to a Piano Jet Black finish, it features a contrasting Lime Green accent, and has been designed with a subtle nod to Aston Martin’s racing heritage.
The chair has been upholstered by Aston Martin’s artisan trimmers, using Conker Saddle Tan Leather, with contrasting Lime stitch.
Finer details of the chair show the aluminium Aston Martin Wings Logo, which has been inlayed into the Piano finish. Those of a keener eye may be able to decipher the coded stitch detailing, A-M-L (Aston Martin Lagonda), which has been crafted into the stitch pattern in Morse code.
More than 30 celebrities, artists and designers, including Made in Chelsea stars, Arsenal Football Club, and rugby player Jonny Wilkinson, have made spectacular hand-painted and upholstered one-off chairs for the event, which is titled Sitting Pretty.
Bidding for each chair is now open, and can be made online at www.chiva-africa.org/sittingpretty. The auction will conclude in a live sale at Bonhams New Bond Street on 15th March. 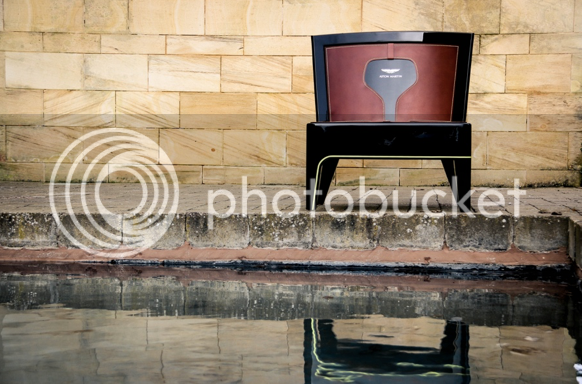 Marek Reichman, Chief Creative Officer at Aston Martin Design, said: “My team and I were delighted to be part of this project – it was a fantastic design challenge to undertake. Our chair encapsulates what Aston Martin is famous for, high quality craftsmanship and design – every part of the design has been hand-made and finished to our exacting high standards. We are very proud of the result, and hope it is successful in raising a lot of money for such a great cause.”
“Bonhams has a long-established relationship with great British marque, Aston Martin, having held our Aston Martin Sale at the Newport Pagnell based Works Service for the past 17 years,” said Tim Schofield, Bonhams UK Head of Motoring.
“Bonhams has several stunning models offered in our upcoming Aston Martin Sale (21 May), including a 1964 Aston Martin DB5 Convertible, estimated at £750,000-850,000, and a 1960 Aston Martin DB4 ‘Series II’ Sports Saloon, estimated at £350,000-385,000. It’s fitting that we’re now able to offer this expertly designed, bespoke chair from the Aston Martin Design team, with the proceeds going to a wonderful charity.”
Further contributors to Sitting Pretty include Arsenal Football Club, and former England rugby player, Jonny Wilkinson CBE.
“It feels fitting for Bonhams to host this event and we are very proud to be working with CHIVA Africa,” said Giles Peppiatt, Bonhams Director of African Art and the sale’s auctioneer. “Bonhams is the global market leader in South African art and we are home to the only sales dedicated to modern and contemporary African art in the world. It feels right to give something back to a part of the world with which we have such a long-established relationship.”
About CHIVA Africa: In South Africa, hundreds of thousands of children and adolescents are living with HIV. CHIVA Africa sends teams of highly skilled volunteer doctors, nurses, psychologists, pharmacists and dietitians from South Africa and the UK to provide targeted, on-site mentoring, teaching, assessment and quality improvement support to health facilities across South Africa. By sharing their knowledge and experience they greatly increase the impact of local frontline staff help them to achieve their ultimate goal – a long and healthy life for all children and adolescents.
“We work with South African healthcare professionals, providing on-site mentoring and teaching to equip them with the skills and knowledge they need to provide high quality, long term care for children and adolescents living with HIV,” Stephen Harvey, CHIVA Africa CEO.
For more information, please visit www.chiva-africa.org/sittingpretty
Posted by jeffharris at 12:59 No comments:

The Ferrari 288 GTO was so desirable that before production had even begun, every single one had been sold. Bonhams now offers a superb example, estimated at €1,300,000-1,700,000, to be sold at the Monaco Sale, taking place in Monte Carlo on 13 May.
From 1984-1987 only 272 Ferrari 288s were built. The model was developed to fulfill the FIA’s (Fédération Internationale de l'Automobile) newly introduced Group B race and rally regulations, which required at least 200 road-going models in production. However, the demand for the exotic new model was so great that Ferrari built an extra 72.
James Knight, Bonhams International Group Motoring Director, said: “Rarely does a car take on iconic status when new, but the Ferrari 288 GTO achieved just that. It was, and still is, considered by many to be one of the finest high-performance cars ever built. In many ways, it is seen as the modern-era supercar that inspired the production of the Porsche 959, the Ferrari F40, the Bugatti EB110 and the McLaren F1.
“For a relatively young car, this example has one of the most impressively comprehensive and detailed files, with six general folders of invoices and correspondence; owner’s wallet with all books; and the Ferrari Classiche certification. The car is exceptionally well maintained.”
Finished in Rosso Corsa livery, this 288 GTO was acquired new in April 1985 by a successful London based businessman and avid Ferrari enthusiast. He took delivery of the car directly from the famed Ferrari factory in Maranello in Italy, and then drove it to the UK. The car has remained in the family ever since.
Bonhams inaugural Monaco Sale will present an exclusive auction of 40 hand-picked, exceptional motor cars. Timed to coincide with the Monaco Grand Prix Historique, the Sale will take place on 13 May 2016. 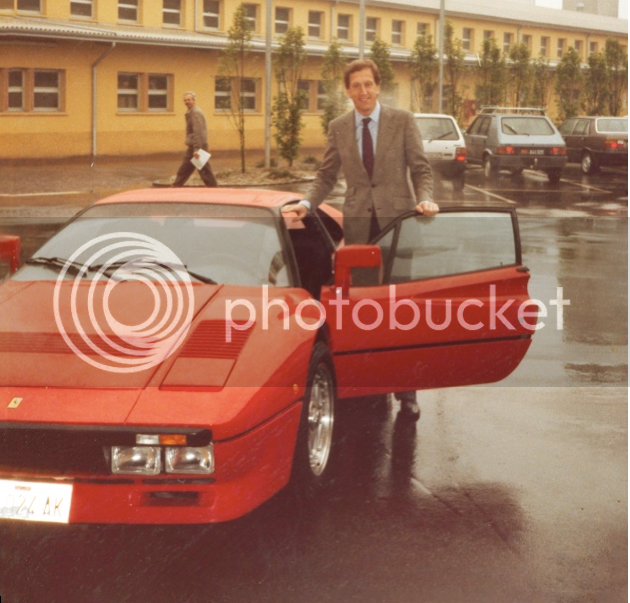 Taking delivery of the 288 GTO from the Maranello factory, Italy
The venue for this grandest of motoring auctions is the prestigious Fairmont Monte Carlo hotel, overlooking the Grand Prix circuit’s famous ‘Station’ hairpin, scene of so much motor sporting drama.
For further information on Bonhams motor car department visit: www.bonhams.com/cars

Posted by jeffharris at 12:50 No comments: