An original Senna Bell Helmet worn during testing at the Paul Ricard Circuit on 2nd March 1994, just months prior to his death at the 1994 San Marino Grand Prix, is estimated at £60,000-80,000. The three-time Formula One World Champion’s patriotism is demonstrated in the helmet’s design which is painted in the Brazilian national colours. The helmet has been certified as the only one of this type, in a signed document which is included in the lot along with the Bell helmet bag.

A Herbert Johnson racing helmet, formerly the property of 1958 World Driver’s Champion Mike Hawthorn is estimated at £10,000 - 14,000. The helmet of ‘Le Papillion’ was previously displayed at the Donington Grand Prix Collection until 2005. It will be sold with a letter of provenance.

A 1952 lightweight racing helmet that is the former property of five-time World Driver’s Champion winner, Juan Manuel Fangio, is estimated at £30,000-40,000. The man who dominated the first decade of Formula One is widely regarded as the most talented F1 driver of all time and this helmet is believed to have been used during the 1952 international race season held in South America and then Europe. The lot is offered with a typed letter of provenance in French with an English translation. The estimate is at £30,000- £40,000.

Of further note are several valuable registration plates:
Posted by jeffharris at 15:22 No comments: 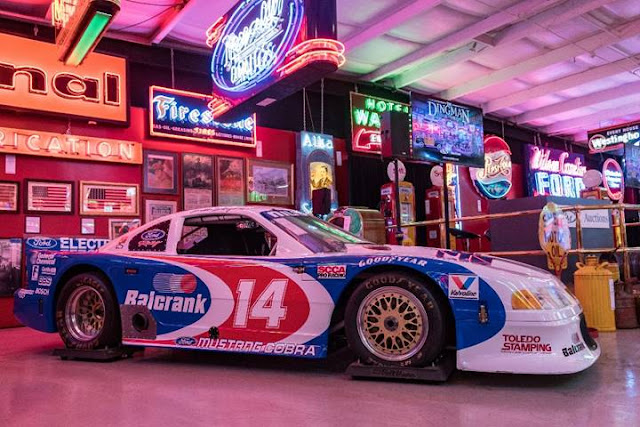 HAMPTON, New Hampshire (25 June 2018) – RM Auctions returned to Hampton, New Hampshire this past weekend (23-24 June) for the company’s concluding presentation of The Dingman Collection, achieving an overall $7,027,334 in total sales, with all lots finding new homes across the two-day auction event. The Dingman Collection, offered entirely without reserve, comprised the remarkable cars and collectables of the late Mr Michael Dingman, long-time Ford Motor Company Director and one of the most important Ford collectors of modern times.
The auction followed RM’s previous successful offerings of lots from The Dingman Collection in both 2012 and 2006 and drew tremendous bidder interest from 36 states across the U.S. and from as far afield as the United Kingdom, Australia, and Asia. In addition to a packed house throughout the weekend, The Dingman Collection drew significant remote bidding interest, with 30 per cent of bidders participating via the internet, and 20 per cent via telephone. Notably, 40 per cent of all bidders represented first-time RM Sotheby’s Group clientele.
“We saw wonderful attendance at The Dingman Collection sale from start to finish,” said Alain Squindo, Chief Operating Officer, RM Sotheby’s Group, following the auction. “Discerning collectors recognize the quality associated with the Dingman name and the late Mr Dingman’s meticulous collecting philosophy and came out in droves to add an important piece to their own garages. The entire RM Auctions team was honoured to present this incredible collection on behalf of the Dingman family.”


The sale featured 37 automobiles, including iconic Fords demonstrating Mr Dingman’s abiding passion for the blue oval and chronicling important moments in the company’s history, all of which drew great interest. Bidding was competitive from the first motor car lot through to perhaps the most exciting moment of the sale, when the 1995 Ford Roush Mustang Cobra SCCA Trans-Am nearly doubled its pre-sale estimate at a final price of $720,000 (est. $300k - $400k). The racecar was used by three-time SCCA Trans-Am Champion Tommy Kendall, as confirmed by the extensive efforts of RM’s in-house research team just weeks prior to the sale. Several other automobiles from the Collection, including iconic Ford woodies that Mr Dingman was well-known for, cruised past their estimates to achieve fantastic prices across the board.
The bulk of The Dingman Collection comprised historic pieces of Americana, including more than 500 exquisite neon, porcelain, and metal signs. Amongst a host of fascinating pieces was the Hamburger and Shake Neon Sign, which soared past estimate to a final sale price of $48,000 (est. $15k-$20k), while signs from iconic American brands such as John Deere, Lincoln, Ford, and Shell performed strongly as well. The much-buzzed-about Silk City Diner by Paterson Vehicle Company, an authentic, beautifully restored 1940s American diner, also impressed with a final price of $336,000. Additional collectables highlights include the Ford 24-Stud Flathead V-8 Cutaway Display Engine (1946-'48), which had the entire phone bidding desk on its feet, bringing $45,600 against a pre-sale estimate of $4,000 - $6,000.

Squindo adds: “The incredible success of The Dingman Collection once again demonstrates why the RM Sotheby’s Group is the clear choice for the presentation of private collections at auction. Our team managed the organization, cataloguing, marketing, onsite presentation, sale, and settlement of all 740 lots from start to finish, providing a turn-key solution for the family and caretakers of the important collection. The active bidding is also a fantastic example of the power of ‘no reserve’ in drawing pre-sale interest.”
Following the auction, Mrs Elizabeth Dingman, wife of the late Mr Michael Dingman commented: "RM Auctions is to be commended on a fabulous job showcasing the Dingman Collection in this weekend’s auction. I want to commend each and every person for their sensitivity and professionalism as my family and I processed the sale of my husband’s beloved treasures. I felt RM respected and valued each piece, which allowed us to go through the letting go of the process of the Collection itself which was so near and dear to my husband’s heart. I know Michael Dingman is smiling, knowing his treasures not only went to those who will continue the historic journey but that his family was treated with such dignity and care, affording us the opportunity to calmly participate throughout the two-day process."
Top 10 sales from The Dingman Collection:

The RM Sotheby’s Group continues its 2018 auction calendar with its flagship Monterey sale, 24-25 August during the world-famous Pebble Beach motoring week. Featuring more than 120 of the world’s most sought-after motor cars, the auction is led by the recently announced 1962 Ferrari 250 GTO, the most valuable car ever offered at auction. Closely following the Monterey sale, the RM Sotheby’s Group returns to the historic Auburn Auction Park for its annual Auburn Fall weekend, 30 August – 2 September, and to Battersea Evolution for the company’s 12th annual London sale, 5 September.

Posted by jeffharris at 14:59 No comments:

BONHAMS SELLS LARGEST COLLECTION OF FORDS IN THE WORLD 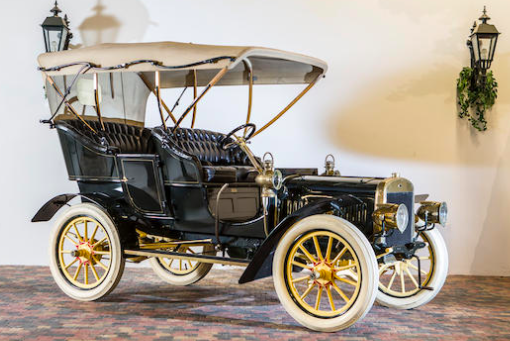 Yesterday, 23 June, Bonhams sold the largest collection of Fords in the world on-site at the Den Hartogh Museum in the Netherlands. The sale was 100% by both lot and value, an astonishing result for a sale comprised of more than 300 lots. The sale total was €6,157,353.

The sale attracted interest from across the globe, with more than 500 people registering to bid for their piece of the marque’s history. The marathon sale lasted 10 hours and was held by four auctioneers.

The ex-William F. Harrah and Imperial Palace Collection 1905 Ford Model B Side Entrance Tonneau inspired the longest bidding exchange of the sale and eventually achieved the world record price of €419,750, more than seven times its estimate.

The variety of lots was staggering, ranging from the elegant 1900’s tourers to snowmobiles – the 1930 Ford Model A Snowmobile achieved €87,400. Successful bids came in from countries as far afield as New Zealand and the US.

Rupert Banner, Group Motoring Director and one of the auctioneers for the sale commented: ‘We were bowled over by today’s result. A 100% sold auction is a rare occurrence, especially one with such a vast quantity of lots. It was a pleasure to be able to find new owners for vehicles that had been treasured for so long. The result shows that the enthusiasm for veteran and vintage vehicles remains strong and that the Ford and Lincoln marques still have a global appeal.

Posted by jeffharris at 14:43 No comments:

Posted by jeffharris at 19:34 No comments:

Posted by jeffharris at 19:30 No comments: