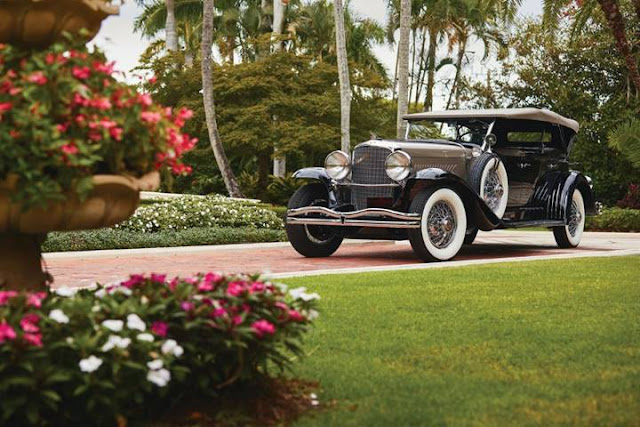 Following enthusiastic bidding and the successful sale of desirable American Classics at the company’s recent Arizona auction, RM Sotheby’s is delighted to announce important Classic Era entries for its 21st annual Amelia Island auction on 8-9 March at the Ritz-Carlton. The group is led by a stunning 1930 Duesenberg Model J ‘Sweep Panel’ Dual-Cowl Phaeton by LeBaron.
The Duesenberg Model J nicknamed the “Duesy,” represents anything truly great or grand. It was bankrolled by E.L. Cord and designed from the outset to be the world’s finest car. When the Model J debuted at the New York Auto Salon on 1 December 1928, its launch dominated newspaper headlines. Today, the Model J still marks the crowning achievement of the Classic Era.
Interestingly, of the mere 18 examples ever produced of the ‘Sweep Panel’ Dual-Cowl Phaeton body style, engine no. J-487 is the one and only example on the long 153½-in. wheelbase. This Duesenberg, fully restored to concours-quality from the ground up by the renowned Fran Roxas, is finished in a stunning rich black and café au lait combination, highlighted by a subtle red pinstripe that delineates the iconic sweep panel, providing a handsome match to the tan cloth top and sumptuous leather interior, with its distinctive engine-turned dashboard. It is an exceptional example of the marque, and one with a known and continuous history from new, which has always been well maintained and cared for throughout its life, as evidenced by its ACD Club Category One Certification (Est. $1,600,000 – $2,000,000).

Further significant pre-war automobiles sure to draw attention in Amelia Island include the only factory non-supercharged 1935 Auburn Eight Custom Speedster, a sought-after Classic in today’s market, offered without reserve from the esteemed Richard L. Burdick Collection, from which strong results were achieved in Arizona ($500,000 – $650,000, offered without reserve); an authentic 1934 Packard Twelve Convertible Sedan Custom, offered fresh to the market following an exceptional restoration (Est. $1,250,000 – $1,500,000); a 1931 Packard Deluxe Eight Convertible Roadster by Derham, formerly of the Julian Eccles and James Weston Collections, coming to Amelia Island complete with its original chassis, engine and bodywork (Est. $650,000 – $750,000); and, formerly of the Imperial Palace and Michael Calore Collections, a 1932 Stutz DV-32 Convertible Victoria by Rollston, one of just five built to this design on DV-32 chassis and an AACA and CCCA 100-point Senior First Prize winner (Est. $750,000 - $1,000,000).
“The RM Sotheby’s Ocean Front Lawn at the Ritz-Carlton Amelia Island has long been where collectors find some of the hobby’s most coveted American Classics,” says Gord Duff, Global Head of Auctions, RM Sotheby’s. “As we saw in Arizona, there is a sustained and perhaps renewed appetite for great pre-war Classics in today’s market, and we’re thrilled to bring collectors rare opportunities such as one of Fran Roxas’ final Duesenberg restoration projects, yet to be shown following completion, an as-pure-as-it-gets Packard Twelve Convertible Sedan Custom, and an Auburn Eight Custom Speedster—a Classic in high demand.”

Ten Brass and Classic Era motor cars will cross the RM Sotheby’s block in Amelia Island, entirely without reserve, following decades of careful stewardship in The Leon-Hackey Collection, a long-standing, true enthusiast name in the hobby. Highlights include:
RM Sotheby’s 21st annual Amelia Island sale is set to take place during the Amelia Island Concours d’Elegance on 8-9 March at the Ritz-Carlton, presenting more than 120 of the world’s most sought-after blue-chip automobiles. Additional entries to be announced. For further information on RM Sotheby’s 2019 Amelia Island auction, please visit rmsothebys.com. Interested consignors and bidders are invited to call RM Sotheby’s headquarters at +1 519 352 4575 to speak with a car specialist.